BENEDMO aims to prevent and counteract the spread of online disinformation in Flanders and the Netherlands. To this end, the BENEDMO hub exists by and for scientists, fact-checkers, media companies and other stakeholders.

The BENEDMO hub will use tools for automated network analysis and NLP technology to detect emerging disinformation campaigns in the Dutch-speaking region and across Europe, and publish fact-checks. In addition, a research team will analyse different strategies and methods that detect fake news, in terms of process, effectiveness and applicability within the European policy and legal framework.

The Flemish-Dutch cooperation fits within the European Digital Media Observatory (EDMO), an international network of hubs where experts in the field of disinformation share knowledge and join forces.

BENEDMO aims to monitor and counter disinformation, promote media literacy and conduct research on the effectiveness of fact-checks. We do this through the following activities:

BENEDMO creates a network of disinformation experts, so that fact-checkers, academics, media organisations and other relevant social actors can reinforce each other with practical knowledge and scientific insights.

BENEDMO develops new research methods and tools to carry out fact-checks and detect disinformation campaigns at an early stage in Flanders, the Netherlands and other EU countries.

BENEDMO develops a digital research lab to systematically investigate the effectiveness of fact-checking. The results will be used by the hub for the development and testing of evidence-based interventions.

BENEDMO builds an inventory of existing teaching materials in the field of media literacy and brings a selection of these to the attention of a wider audience. In addition, we examine the supply and need for teaching materials for media professionals and journalists. Based on this, we can develop customised training courses.

“The EDMO hubs, such as BENEDMO, play a crucial role in mapping disinformation. The hubs analyze disinformation campaigns, organize media literacy activities, and support local media and authorities. They provide a clearer picture of the situation at the national and regional level to promote the fight against disinformation.”
Professor Miguel Poiares Maduro, Chair of the EDMO Board of Directors

Bellingcat is an international citizen investigative journalism network, specialised in gathering open-source intelligence (OSINT) through online verifiable sources such as social media and open data. This non-profit organisation focuses on a wide range of socially relevant topics and international conflicts, many of which involve misinformation and disinformation. Bellingcat uses an evidence-based method to expose injustice and promote justice, accountability and transparency.

Sound & Vision is a national institute for media and culture with a media collection consisting of more than one million hours of material, to which new material is being added daily. Sound & Vision offers its collection to various users, including journalists, students, researchers, heritage organisations and the general public. With its collection, expertise and activities, Sound & Vision aims to contribute to an open and free society.

Textgain is a company that develops Natural Language Processing (NLP) technologies to extract insights from digital documents. Textgain coordinates the European Observatory of Online Hate that uses Artificial Intelligence to detect harmful social trends and tensions in online messages. Within BENEDMO, Textgain will further develop this technology to effectively detect sources of polarisation and disinformation, so that journalists and moderators can more quickly mitigate the harmful effects of such messages.

Newscheckers participates on behalf of the University of Leiden in BENEDMO. Newscheckers is a fact-checking initiative that unites education, research and journalistic practice. Fact-checkers and students of the Journalism and New Media programme check news items, political claims and social media posts. The fact-checks are published on nieuwscheckers.nl.

The Political Communication Program Group of the Amsterdam School of Communication Research (ASCoR) hosts a team of researchers with leading international expertise on the content and effects of disinformation. Among other things, different experimental studies on the impact of disinformation and deep fakes on political attitudes have been published, as well as research lines on the effectiveness of fact-checking and news media literacy. The methodological tools and experimental set-ups developed can be used to create a new lab to monitor the impact of disinformation and fact-checking on citizens in the Netherlands and Belgium.

The VRT is the public broadcaster of the Flemish community in Belgium. The VRT wants to inform, inspire and connect all Flemings and thereby strengthen Flemish society. Its main mission is to strengthen democracy and society by contributing to a social and pluralistic debate, documenting society and promoting culture, language and the Flemish society in all its diversity. VRT NWS is the news service of the VRT. It provides news and current affairs programmes on three TV channels and five radio channels, as well as the website, a VRT NWS app and various other digital platforms and channels. The EDMO project supports the operation of the DDT cell of VRT NWS, a specialist editorial team that focuses on Data, Disinformation and Technology. The VRT has extensive experience with fact-checking via the corresponding sections in numerous online and TV formats, as well as with content creation around media literacy, such as the educational format ‘EDUbox fake news’.

For BENEDMO, VRT NWS will closely cooperate with Knack, which will not formally join the consortium. Knack is the news magazine par excellence in Flanders. It offers background information on current affairs at home and abroad, and focuses in particular on economy, politics, culture, society and social media. Knack Magazine is a publication of the media company Roularta Media Group. Knack started in 2012 with a weekly separate fact-checking section. In 2019 it became a member of the International Fact-Checking Network, and in 2020 a collaboration with Facebook followed via its third-party fact-checking programme.

KU Leuven is an internationally oriented university which, through its Journalism master’s programme, is one of the entities behind Factcheck.Vlaanderen. This is an independent non-profit project created in 2019 and dedicated to fact-checking online content and public statements. Using Artificial Intelligence, they identify disinformation on social media, which is subsequently fact-checked by the editorial team consisting of professional fact-checkers and students.

Since 1934, the ANP has delivered independent and factually correct news to the media and other organisations. ANP’s production process involves 250 employees every day. They verify incoming information, rumours, press releases and other media reports and provide context for them. The resulting news items, radio bulletins, photographs and graphics form the building blocks of many media productions.

Netwerk Mediawijsheid will be involved as a knowledge partner in BENEDMO’s media literacy activity. The Dutch network organisation is dedicated to the mission ‘Everyone media savvy’. They do this together with more than a thousand member organisations that are actively committed to media literacy. These include libraries, cultural institutions, media coaches, developers, publishers, research institutes, ICT companies, media producers and welfare organisations.

Mediawijs is the Flemish Knowledge Centre for Digital and Media Literacy by the Flemish government and imec vzw. Mediawijs helps citizens of Flanders and Brussels to use and understand digital technology and media actively, creatively, critically and consciously in order to participate in our society. Mediawijs will be involved as a knowledge partner in the media literacy activity of BENEDMO and is also a consortium partner of the Belgium-Luxembourg hub BELUX. 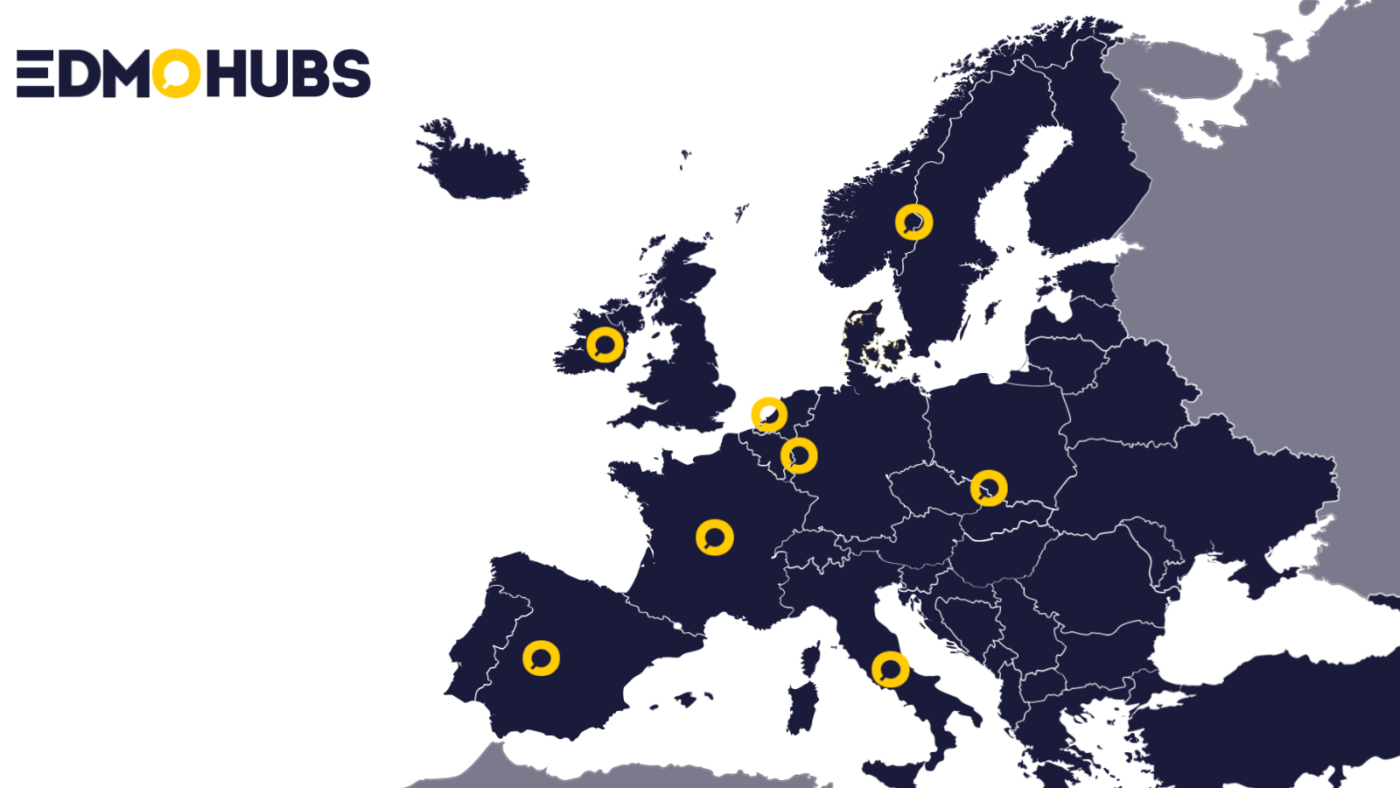 Other EDMO hubs in Europe

‘If I Saw It on Facebook, It Must Be True’: BENEDMO Masterclass during the Dutch Media Week 2022

State of the Art report by MediaNumeric

Poly-truth, or the limits of pluralism Popular debates on conspiracy theories in a post-truth era

State of the art in fact-checking technology

Degrees of deception: the effects of different types of COVID-19 misinformation and the effectiveness of corrective information in crisis times

EDMO establishes a taskforce on disinformation about the war in Ukraine